Elf and the class pet Bee-Bee!

December 09, 2013
So the goose was sent home with the class pet yesterday.  We had made no plans and did not know what to do with him exactly.  I figured that if we were going to have the class pet lets go wild doing cool stuff. First which was already planned we went to the Trans Siberian orchestra concert and left Bee-Bee in the car so that he would not get lost.

We had a blast at the concert.  If they come to your area it is a must see.

Luigi and Bee-Bee were playing bobbin' bumblebee's...I set it up on the table the night before took the picture and during the night the dog came by and grabbed bee from the table.  The poor little fellow lost an eye and had some puncture wounds in his head.  Terrified what the teacher would say when goose brought back the class pet in such condition I quickly found and ordered a new one on Amazon.  Note to self never trust your dog.

Along with them playing the game Luigi brought a note with grow your own candy canes.  Inside the box I placed rice some snow and glitter and some sixlets the same colors that the candy canes were going to be.  Then we planted them make sure you count them before so you know how many you have ahead of time.
THEY WILL REMEMBER HOW MANY SEEDS YOU PLANTED.
I bought two boxes on candy canes.  One at a time I broke off little pieces and put the unbroken end in the snow.  If I caught him doing something nice they candy canes would grow. Little by little his behavior helped them grow.  Today was day four and he woke up to a full sized candy cane.  I didn't remove the wrapper and he said mom why does this one have a wrapper?
Damn kid is too smart for his own good!
I think if all the candy canes grew at the same time we would not be motivated by behavior.  This way he has to be good over a number of days.
It's great to see a child actually believe that candy canes can grow in plastic snow due to good behavior.  Ahhhh to be a child again!
Here is some pictures I forgot to post about the elf.  Day two and three!

Check back later this week for more elf ideas and a lesson on the Night Tree by Eva Bunting!
candy canes christmas December Lesson plans elf on the shelf 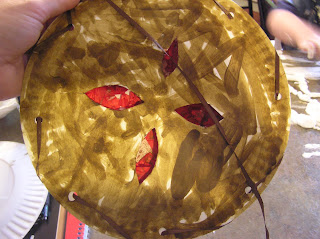 Last night I was thinking of things to do with Apples hmmmmm.... I was putting away the dishes and moved the paper plates and it hit me Paper Plate Apple Pies!!! I really like how these came out and so did the Goose. Now here's what you need: 2 paper plates Something to color the plate brown, (crayon, paint or this bingo markers that the goose is in love with) Red construction paper or tissue paper ( oriental trading has them cut already for you for a really cheap price) Cinnamon and or nutmeg Glue String or ribbon ( I left the string long so we could hang it in the kitchen. hole punch Directions: Take the two paper plates and hole punch them, ( Hint make a mark of where they line up because you will have a hard time finding the way the holes line up or save till end. ;) Then crumble paper and paste on bottom "crust". I cut holes in the top so it looks more like a pie, just fold "crust" like you would cut out a snowflake. Paint top and apply extra glu 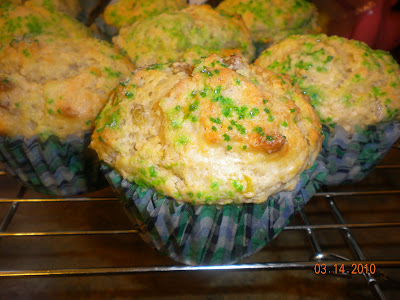 Leapin' Leprechaun's...we had a busy day today. Grocery Shopping, Cleaning, Laundry and then the FUN stuff. First, we made Irish Soda Bread Muffins recipe here . (I didn't use the Caraway seed and they were so yummy!) Then we made our Muffin Tin Monday GREEN Tin 1. Green Juice--Food Coloring 2. Shamrock Cookie 3. Green Grapes 4. Kiwi 5. Ham Steak Strips 6. Green Yogurt with a green spoon ;)--Food Coloring 7. Green Pepper Shamrocks with Green French Onion dip--Food Coloring 8. Irish Soda Bread Muffins(see above)I made these into suns with cheese slices We also made and played a shamrock match game see Here for printables. More great Printables HERE ...well worth the money. I came across this site and fell in love with the different items they have. Also on St Patrick's Day be sure visit and buy your tot some learning aids. Be sure to follow me... I have alot of neat ideas for Easter that will be sure to please you.